There are hundreds of different types of electrical connectors, each with its own unique features tailored for a wide range of applications. Connectors surround us every day, from home to work, helping support applications such as industrial automation, medical technology, military, aerospace, and more to ensure reliable, safe operations. It can become easy to take the functionality and performance of electrical connectors for granted — something that is entirely dependent on how they are made and what type of quality assurance inspections are involved.

The Basics of Electrical Connectors

In principle, electrical connectors are designed to temporarily join conductive paths to allow electrical current to flow either to power a device, or transmit signals. 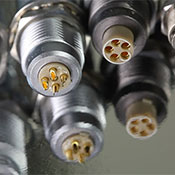 These connectors have male ends (often called pins or plugs) and female ends (often called sockets or receptacles) that mate to form a connection. Electrical connectors provide flexibility with your equipment compared to permanently hard wiring and are essential in providing reliable electrical contact and, ultimately, ease of use for your customers.

Electrical connectors are commonly made up of at least two key components: housing and terminals/contacts.

The housing of a connector is the structure or shell which secures the electrical connection and protects the internal components from external interference. Housings are manufactured in various methods depending on their intended application; however, they are commonly made from either molded plastic or metal. The terminals refer to the connector’s contacts which are then made from conductive metals such as copper and are typically protected plated with metals such as gold or tin for a longer-lasting connection.

The method of producing an electrical connector varies depending on the connector series and the specific testing requirements each connector has.

Multiple inspections must occur throughout each stage to verify that the components are free of defects and (specifically at the assembly stage) ensure the connector meets its own specification requirements.

To break down the process of manufacturing connectors, it is best to separate them into their individual components; here is a high-level breakdown of the following:

If the connector is made of plastic, typically, the connector is created via an injection mold where plastic pellets are melted at a high temperature and morphed into a particular shape before cooling and solidifying.

Plating involves coating the connector shell with a metal coating primarily to enhance electrical conductivity, protect from rusting, and guard against abrasion — all working together to ensure the final product is durable.

After the plating process, X-ray fluorescence detects potential issues such as incomplete plating or variations in the plating thickness. In addition, visual testing can reveal the presence of cracks, pits, blisters, excessive build-up around the edges, and a non-uniform appearance.

In the center of any connector, there has to be a non-conductive insert that separates the pins from the connector housing. For metal connectors, the insert is traditionally made from a rubber/silicone material that will evenly separate the conductive contacts from electrical issues like creepage and clearance concerns.

This isn’t as much of a concern when a connector is made from a non-conductive material like plastic, where the connector housing can be designed to be its own insert. That way, you are limiting the amount of injection molding processes you need to under-carry.

Manufacturing contacts are similar to the connector housing; however, this time, they can only be produced with a conductive metal. 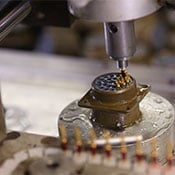 There are two main ways to produce contacts for a connector, machining the pins via a CNC machine or manufacturing by stamping.

Stamping uses thin metal strips and a high-speed stamping press or machine. Stamping is a form of sheet metal fabrication that both shears and cold-forms three-dimensional shapes.

The automated stamping press receives a coil of sheet metal at the front end, which passes through several high-speed progressive dies that progressively shear and bend the sheet metal to achieve a highly accurate shape with predictable mechanical properties. After the stamping process is complete, sensors and camera vision systems verify the products' final shape and critical dimensions.

Lastly, the final stage of creating an electrical connector is the assembly, and this is where
PEI-Genesis excels.

By stocking all of the connector housing, inserts, and contacts required to produce a wide range of part number permutations, PEI proudly offers quick turnaround value-added connectors at a fraction of the lead-time than if purchased directly from the connector manufacturer.

With our 75 years of connector experience and in-depth connector knowledge, our quality assurance inspectors use a variety of tools and techniques to ensure all connectors are manufactured to the correct specification.