Electric Vertical Takeoff and Landing aircraft, also known as eVTOL, is a new and emerging market projected to experience significant growth in commercial and military spaces over the next ten years due to its extensive list of applications. eVTOLs are small-scale versatile drone aircraft that can take off and land vertically — a feature that could change public transportation as we know it. eVTOLs are expected to play a considerable role in the aircraft industry as critical links between different modes of connected, future-oriented transit (such as aerial taxis and delivery vehicles). This growing market and the technology behind eVTOL aircraft also impact the interconnects industry, presenting new challenges and opportunities to engineers looking to design autonomous, environmentally friendly aircraft.

eVTOL aircraft house several main components, including controllers, fuel cells, and generators, and use one of three battery types: hydrogen fuel cells, solid-state batteries, or lithium-ion batteries. In terms of power for propulsion, these drone aircraft are either fully electric, hybrid, or powered by electric hydrogen.

eVTOL technology provides various advantages over traditional engine aircraft, including zero local emission, making them an environmentally conscious choice. Additionally, eVTOL aircraft are both quieter and less expensive than conventional helicopter travel. Some financial models estimate that the cost of eVTOL transit would be on the same order per mile as rideshare services such as Uber or Lyft.

Several key factors drive the eVTOL market, including increased road traffic congestion in urban areas and the need for quick transportation. Quick transportation can include anything from public, personal, and emergency medical transport to military passenger and cargo transport. There is also a growing interest in minimizing human interference in travel that leans toward autonomous modes of aircraft travel.

According to Market Research Future (MRFR) experts, the Global eVTOL Aircraft Market is projected to acquire a market value of USD 4,063.3 million while rapidly expanding at a CAGR (Compound Annual Growth Rate) of 30.30% by the year 2030. While this may seem promising, high initial investments in infrastructure and a lack of 5G infrastructure in various countries may curb this growth.

The Challenge of Interconnect Solutions for eVTOL Aircraft

The opportunities presented by eVTOL production drive design engineers to research connector components that can optimize size, weight, and power (SWaP) for line replaceable units (LRUs). eVTOL aircraft employ high amounts of electrical power to enable vehicle takeoff and maintain flight. Design engineers are then presented with the challenge of specifying a connector that can handle high voltages and high kW peak output for eVTOL electric propulsion motors, controllers, batteries, inverters, sensors, and infotainment. Safety presents a critical element for the growth and success of the entire industry, and peak amperage requirements during planned or unplanned landings challenge the capabilities of many connectors out there today. The interconnects must also handle vibration and shock without compromising the connection’s integrity.

When engineering an eVTOL aircraft, it is critical that the gross takeoff weight is minimized, including the weight of avionics and related interconnects and cabling. Both interconnect and cabling solutions are necessary for many areas of eVTOL aircraft, including power and power distribution, infotainment and cabin interior, avionics, flight control, and navigation.

Each one of these systems also faces its own set of challenges. For example, inflight entertainment (IFE) used in eVTOL aircraft must have connectors capable of handling low-voltage and high-bandwidth simultaneously, while avionic, flight control, and navigation are mission-critical applications that demand connectors with high reliability. 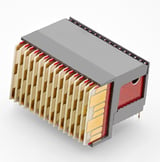 The TE Connectivity Multigig RT Connector product line is an effective interconnect solution for eVTOL aircraft. These high-speed backplane connectors are designed to support an increased bandwidth of 25+ Gb/s. The contacts utilize quad redundant contacts for optimum performance in shock and vibration — a common challenge in eVTOL aircraft. Their compact, light-weight design makes them an incredibly effective solution for eVTOL applications, including avionics and IFE.

TE Connectivity Multigig RT pinless backplane connectors also have a PCB construction and are available in two compliant pin designs, allowing for extreme flexibility within the connector system. They also feature an insertion loss of less than 1dB, making them an excellent choice for the future-proof design of next-generation applications. Additionally, they are backward compatible with legacy VPX products.

As the eVTOL market grows, so does the need for reliable connector solutions to meet the unique demands of these drone aircraft. At PEI-Genesis, our team recognizes the challenges involved in general aviation connector design and the specific issues faced by eVTOL engineers. Our connectivity experts can help you find the right interconnect solution, whether it is a connector for the avionics system or a custom-engineered SWAP optimized-solution for power distribution.