The Future of Transportation: Underground Roadways and Air Taxis

Engineers from multiple disciplines are seeking innovative ways to leverage the available space above and below cities to provide new transportation solutions. Whether it's the sky above a busy metropolis or tunnels beneath it, the future of transportation must provide fast, efficient, safe, and environmentally sound solutions not viable without rugged, reliable electrical connectors.

Elon Musk’s vision for the roadways of the future is simple in theory: underground roadway systems using tunnels for busy cities like Los Angeles and Las Vegas. Such a roadway has already been implemented in Las Vegas, known as the Las Vegas Convention Center Loop (or LVCC). The company behind LVCC is The Boring Company, owned by Elon Musk.

While currently 1.5 miles long with three stops, the LVCC has been approved to expand to 29 miles in length with 51 stations, transporting 57,000 passengers per hour. Its purpose is to connect major hotels, airports, and the Las Vegas Convention Center.

The LVCC has a metal elevator that lowers electric vehicles underground to transport them at high speeds of up to 155 mph directly to their destination. A ride that would typically take 30 minutes can take only 3 minutes. The vehicles are transported automatically to prevent accidents, and because the system is fully electric, there are no hazardous gases generated.

Tunnels such as these are cost-effective and a greener alternative to traditional rail systems. Furthermore, the tunnels are weatherproof and engineered to be very safe. For example, if a fire occurs, the tunnel has a bidirectional ventilation system that will remove the smoke to allow people to evacuate safely.

The LVCC system includes camera coverage, fire detection systems, emergency exits, emergency communication systems, and direct communication to an Operational Control Center with Blue Light Stations, LTE cell service, and WiFi. Tunnels such as this are a safe place to be in case of an earthquake, which can be particularly troubling in Los Angeles, California.

As cities continue to grow faster than the infrastructure that supports transportation, engineers are looking for ways to transport people more quickly while also reducing traffic. Another transportation development is the use of air taxis, which are already predicted to launch in Europe by 2024, according to the European Union Aviation Safety Agency (EASA). 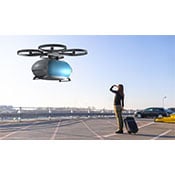 One solution is to use the airspace above cities, which is safer than ground transportation and far less crowded. What would take 40 minutes by car takes only 15 minutes by air travel. Airbus Urban Air Mobility is taking the lead in developing air taxis and is using the electrically-powered eVTOL aircraft model (electric vertical take-off and landing). This approach to urban flight relies on rechargeable batteries instead of fuel to provide power. It is actively being developed by aircraft companies such as Boeing, Airbus, Honda, Toyota, and Hyundai.

Impact on the Connector Industry

Air taxis will also require highly reliable and rugged interconnect solutions for sensors, actuators, avionic systems, and flight deck controls. Solutions for eVTOL air taxis must be lightweight, able to handle high voltages, and resistant to the effects of high vibration and shock loadings. In addition, they need to be able to endure harsh weather conditions, including lightning and rainstorms. They must also be protected from electromagnetic interference and radio frequency interference, which can cause potentially fatal disruptions and require EMI/RFI shielding.

PEI-Genesis: Looking to the Future of Connectors

At PEI-Genesis, we are continually looking to the future to ensure that our customers have the right interconnect solutions to support their latest designs. Whether you are developing an eVTOL air taxi that must support safety and functionality, or a skate for use in an underground road system, our connector experts will work with you from the earliest stages of your design.

Mark’s career journey at PEI-Genesis started the day he ran from the police. Yes, you read that correctly...
PEI-Genesis 1/26/23 9:45 AM

Analog and digital signals use changes in time and amplitude to represent data for transfer and reception...
PEI-Genesis 1/12/23 9:45 AM

Find Your Solution With PCB Termination

PCB termination solutions are advancing and becoming more popular for good reasons. Along with benefits s...
PEI-Genesis 12/15/22 9:45 AM