Introducing James Jell – one of the newest members to the PEI family. James joins us as a sales engineer for the rail market, an arena in which he has more than 40 years of experience. And while he is a new employee, James is no stranger to PEI, having spent years building a relationship with us as a supplier. 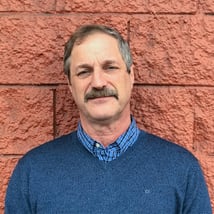 James began his career as a factory worker at GE and has held multiple positions in engineering and engineering automation. He moved to the rail business in 1995 and has worked on locomotives ever since. James welcomes the challenge posed by the nuance of locomotive design, each one a puzzle to unlock.

It’s a career that’s allowed him to witness exciting innovations, most notably his work on the AC4400 locomotive’s transition from DC to AC traction motors in the mid-90s. And what will the future of the rail industry bring? According to James, the rise of widespread mass transit, something he predicts will expand in the U.S. over the next decade.

James is enjoying the transition from design engineer to sales engineer, and the new trials it offers. Some days feel like home runs, others can leave him feeling like he struck out.

But James’ life isn’t just about railroads. He’s been married 42 years, and in his spare time you’ll find James hunting, fishing, traveling, refurbishing firearms, or gardening vegetables, to name just a few of his many hobbies.

His travels have taken him across the American west, although he hopes to head north to Alaska, where his oldest son works in the summer. He roots for the Pittsburgh Steelers and Buffalo Bills, along with the Erie Otters ice hockey team.

James’ greatest inspiration in life was his grandfather, whose self-made attitude was contagious – he never found a task too daunting to accomplish. James tries to incorporate that mentality into his own life, with the mantra to share everything you know, work hard and have fun.

Welcome to the PEI team, James!