Since their origins in the 1930s, coaxial RF (Radio Frequency) electrical connectors have advanced their capabilities and are considered reliable, rugged, high-performance connectors. Today, these RF connectors — designed to work at radio frequencies in the multi-megahertz range — are used in various markets, including telecommunications, aerospace, industrial equipment, and military applications.

The Evolution of RF Connectors

The type N connector, often referred to as an N connector, was one of the first connectors capable of carrying microwave frequencies. This particular connector was invented in the 1940s by Paul Neill of Bell Labs (who the connector was named after), and modern versions continue to be used in low-frequency microwave systems.

Later, the BNC connector was co-created by Paul Neil and Carl Concelman (who is also credited with the C connector) and patented by Amphenol in 1951. The goal behind its development was to minimize wave reflection/loss. Originally used for military applications, it now finds use in RFs up to 2 GHz and is often used in connection with the transfer of composite video on commercial video devices.

The SMA (Sub-Miniature A) RF connector — originally named the ‘BRM’ (Bendix Real Miniature) connector — was designed in 1958 by James Cheal at Bendix Research Laboratories. Development of the SMA connector continued four years later in 1962 by Omni Spectra. At that time, it became known as OSM (Omni Spectra Miniature). However, it wasn’t until 1968 that it received its current designation of SMA as it was incorporated into MIL-C-39012. Now, SMA connectors are used in applications ranging from RF power amplifiers to Wi-Fi antenna systems. 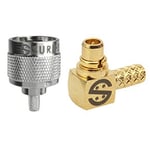 The Sure-Seal RF connector series is available in both non & waterproof permutations, allowing the electrical connector to be used in solutions for harsh environment communication systems. They are reliable and rugged electrical industrial connectors fully compatible with MIL-STD-348B. The waterproof sealed version connectors are well adapted for use in control networks, harsh environment outdoor applications, and mission-critical designs that necessitate a dependable connection.

This RF connector series is suitable for use with flexible, semi-flexible, and semi-rigid cables. In addition, the connector and cable assemblies are available in a variety of permutations, including TNC, BNC, SMA, and more.

TE Connectivity Mil-Spec RF connectors are suitable for applications where reduced weight, high density, and durability are required. They have been designed to accept multiple ohm mini coax cables and find many uses in military, defense, and aerospace applications.

PEI-Genesis: Your Source for RF Connectors

Whether you need Mil-Spec RF connectors for a harsh environment or DOT-approved RF connectors for automotive applications where salt-spray and shock loadings are common, PEI-Genesis can help. Our large inventory of off-the-shelf electrical connectors will give you confidence in knowing you will find the best option for your design specifications and budget. PEI-Genesis’ team of connector experts and engineers will work with you to find the right connector solution for your application or help you develop a custom-engineered one.

Rapidly changing market requirements combined with consumers who have grown accustomed to extensive custo...
PEI-Genesis 12/2/21 9:45 AM

Originally developed for commercial systems, HDMI connectors have evolved through the years to include ha...
PEI-Genesis 11/11/21 9:45 AM